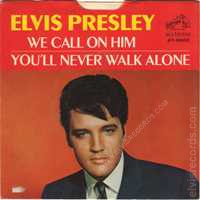 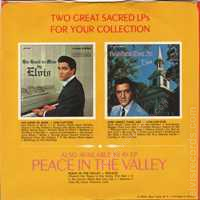 Disc: Yellow label. NOT FOR SALE. Catalog number not in bold font. Matrix number above time.1 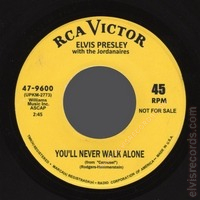 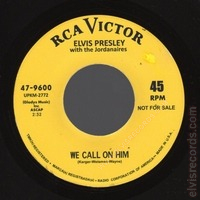 Thanks to the keen eye of collector PatrickM.; this is a fake! The font is incorrect. The placement of the parenthesis is incorrect on one side. There is a white paper edge. The paper stock is incorrect. 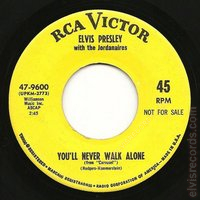 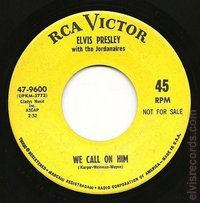 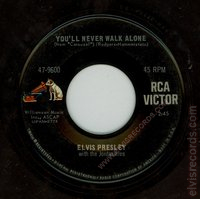 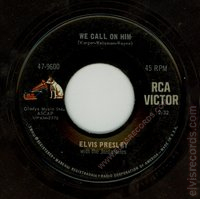 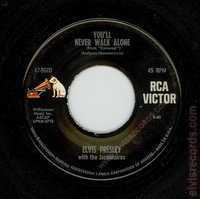 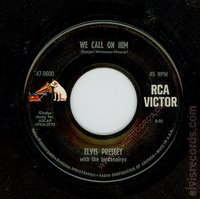 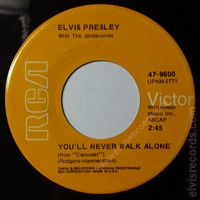 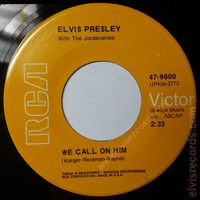 The UPKM-2773 is directly below the catalog number, like the red label of 12/1970. However, compare all other orange labels, regular release Elvis for 1968 and 1969 and it can be seen that the take will be directly below the music publisher and above the time. This take is in an odd place for an orange label. The placement of UPKM-2773 label is consistent with Elvis beginning with April 1970 with 47-9835. An RCA release from 2/1970 with catalog 47-9810 places the take number directly below the catalog number. Also, 2/1970 catalog 47-9806 places the take number under the music publisher and above the time. I would place this copy between 2/1970 and 12/1970. A reasonable guess would place this more likely around 3/1970 to promote the sacred albums on the back as well as this title for Easter. There are distinct differences between the this orange label and the red label 447-0665 in cases and commas or no commas so I would not consider this a transitional label. Paul Dowling of Worldwide Elvis has independently confirmed in this analysis and opinion.

This record sold on Aug. 27, 2016 for $675 on eBay8. The description offers some insight into it's reason for existence. "One of a kind orange label We Call on Him / You'll Never Walk Alone 47-9600 made in the USA. This is not a gold standard release, the original was a black label DOS, the guy I got it from said his dad worked for RCA in Indianapolis and this could have been a trial printing to see what the new orange label was going to look like and that this could possibly be the very first RCA 45 to be printed on the new upcoming orange label. Record is very good shape not mint on a scale of 1 to 10 it is an 8 also comes with an original picture sleeve.8"

Re-released by RCA Records on 45 RPM as You'll Never Walk Alone / We Call On Him on the Gold Standard Series label.