In 1960, RCA and a number of major record labels had introduced the compact 33 single in an attempt to create a one-speed format market.1 It was also a year where RCA experienced "a lackluster year with 45 RPM single sales, so January 1961 the Compact 33 RPM was to debut. The logic was that most record players offer a potential for playing 33 singles which didn't exist until a year earlier."2 It was a move that many within the industry had thought would take two to five years3 for the market sales to switch from the 45s to the compact 33s. With a shortage of inexpensive automatic 33-speed singles players to discourage promotion of the compact 33 and the majority, of 3,000 discount stores cutting their prices of the 45 RPM from ninety-eight cents to seventy-seven cents, by 1961 the compact 33 as an industry standard was no more.1 This research is a basis for understanding the reason for the extreme values attached to artists such as Elvis Presley Compact 33 singles.

The Launch
RCA Victor launched their Compact 33 promotional campaign with Dr. West whom at that time was the world's largest manufacturer of toothbrushes. The initial launch would be with at least 25 Compact 33's in a Highlighter (one side monaural and the other stereo). With an initial order in the million figure, the Highlighters were to be available at over 60,000 outlets at 84 cents which include an attached toothbrush. Media promotion through Life, Seventeen, Ingenue, Playbill, Ebony, Parent's Magazine, and key newspaper markets. Dealers were to have made available a 350 Compact 33 display. The cost of this promotion was nearly $750,000 ($5,680,000 in 2012 dollars).

Branded as "Dr. West's presents Tundes for Teens", this highligher at 88 cents contains the following tracks: Hey There (Sam Cooke), Who's Gonna Buy You Ribbons (The Browns), Circulate (Neil Sedaka), and Young and Warm and Wonderful (Rod Lauren). 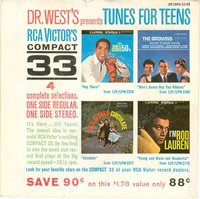 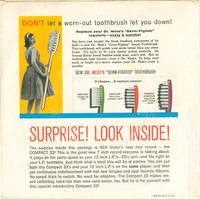 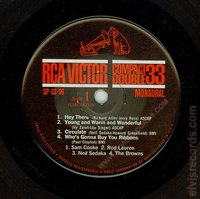 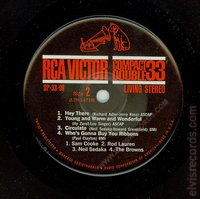 At the end of the Dr. West promotion, this Compact Double 33 was later re-issued with the $1.29 price point making no mention of Dr. West. 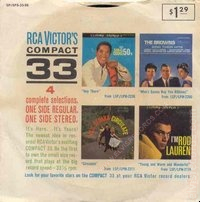 George Marek, VP and GM of RCA Victor states the company will be going "all the way" meaning "all singles product will be issued simultaneously on the Compact 33 and 45. The long-term outlook is the 33 RPM speed will eventually phase out the 45 RPM. He also stated that "with the Compact 33, a market can be created for those who like pop music but do not wish to buy or cannot afford a 12-inch LP. The new record should also be appealing to those who want to sample a new artist thru a single and then, if pleased, acquire a long playing record of that same artist."

Columbia Records has had some recent success using their Compact 33 for promotional programs, mailing stuffers, greeting cards, or specialy items. Their disks generally sell when placed on display at the dealer level.2

RCA Victor announces the Dramatic introduction of the Compact 33 record format. "Basic to the growth of any industry is new product. RCA Victor starts 1961 with the all-important introduction of the Compact 33 single and double. Over a million homes will be introduced to this exciting new king of record by a Special Compact 33 made for a promotional tie-in with Dr. West toothbrushes, supported by a far-reaching national advertising and promotional campaign. This pre-selling of Compact 33 will open new marketing vistas for both Popular and Classical music for the entire industry.

RCA Victor believes that the once profitable classical "singles" market on 78 RPM days can be built into an important segment of the business with the Compact 33. Repertoire will feature popular classics performed by favorite concert artists."6

RCA Victor has shipped out the first Compact 33 singles to it's dealers throughout the country. The first singles on the 33 RPM speed include Della Reese, Andy and the Bey Sisters, the Ames Brothers, Boots Randolph, and Barry Martin. The records are also made available on the 45 RPM format. For the moment, both formats will be shipping to the disk jockeys.7

RCA places a one page add in Billboard highlighting the Compact 33 format for their recording needs. After all, this approach had been documented to work for Columbia records months before.8

NARM, the National Association of Record Merchandisers is composed of approx. 50 large "record rack jobbers" throughout the country had announced their full support in the merchandising of the Compact 33 single.9

"RCA started a great press campaign for its Compact 33 ... Connie Francis singing in Spanish and Italian ..."10 The important reference to take from this statement is that RCA had hoped that since the Compact 33, particularly the double Compact 33 can hold more "data" then there could be an expansion as to what these singles hold.

A more recent example of this could be taking a DVD and then "upgrading" to a Blu-Ray disc as it will not only provide you with the same entertainment as the original, now being towted as a "standard" however can expand upon the entertainment experience.

The Failure
The music industry did not embrace the Compact 33 format.

A production manager of WBUC, Buckhannon, WV writes ..."At first we thought the compact 33 single was a good idea in as much as it would cut down on the possibility of getting a record on the wrong speed when playing mixed shows using both singles and albums. However, we have fast changed our minds. Actually we can see no advantage whatsoever in changing from the present 45's to anything! Since the compact 33 is the same diameter, it doe snot offer any advantage in filing. There doesn't seem to be any noticeable improvement in fidelity. The 45 is so much easier to handle, since you can stick a finger through the holes in a whole stack of records and pick them up without dropping half of them. Both in picking out records for an air show and in using them on my record hops, I find 45's handy as a pocket in a shirt, while the compact 33 is a pain in the neck. One 33 in the stack fouls up the shole stack or rack of disks.11

Bob Kidd, KUZN, West Monroes, La., writes, "Would like to congratulate Dale Brooks of WBUC, Buckhannon, WV., for speaking up for the good old standbys, the 45 RPM disks. We agree, and think the industry should stick with the 45's and leave the compact 33's to the record retailers." ... Hy Lit, WCAM, Camden, NJ12

After considering the concept as a retail entity, most diskers called last week were pessimistic. There were recollections of various experiments with new concepts in disks, such as RCA Victor's compact 33-speed singles, Columbia's stereo 33, introduced some time before, and others. In none of these cases, did the disks in question make a serious dent in the marketing picture. Fault, in most cases, was laid at the doorstep of Mr. Average Record Dealer, whose problems of inventory were already compounded by the necessity of stocking both stereo and monaural versions of the same LP titles.13