There is a picture sleeve that had surfaced on eBay and sold in auction on July 12, 2011 for $2,224. Part of the description reads as follows, "This Picture Sleeve and 45 were obtained through an estate. The[y] were found framed along with other Elvis Sun 45s. Not much is know[n] about the person who these belonged to. As the expert's best guess was this was a traveling salesman's promotional item."1. This picture sleeve has became a topic of conversation with respected book author and researcher, Neal Umphred. He raised into question the "nebulous" detail about this sleeve that was provided in the article Mystery Train / I Forgot to Remember to Forget.

Since this find, the sleeve has been under scrutiny by some collectors; however, readily accepted by others as being original. It is a buyer beware world, particularly when a description of an auction generalizes the province of a piece with language that includes "obtained through an estate sale". This find even worked its way into the pages of the Presleyana VI book where the picture of Elvis' concert photo is incorrectly identified as taken from the Louisiana Hayride.

There are so many inconsistencies in design and content of this "RCA Victor Record Bulletin" sleeve that was supposedly released on December 2, 1955 to prove without a doubt it is nothing more than a fantasy sleeve. 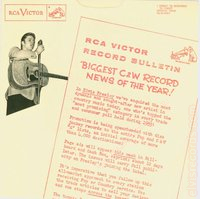 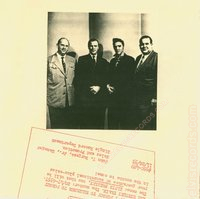 Wrapped around both sides of the sleeve feature an RCA Victor Record Bulletin23 This record bulletin was printed on November 28, 1955.

The back of the sleeve features a picture of Colonel Parker, Eddy Arnold, Elvis and Steve Sholes. This picture was taken December 1, 1955 in New York.4

The front of the sleeve features a photo of Elvis Presley. It hasn't been questioned until now as to when or where this picture was taken. On April 21, 1956 Elvis performed two shows in Houston, TX. City Auditorium at 7:30 PM and 9:30 PM.56

This picture68 was taken on that date. 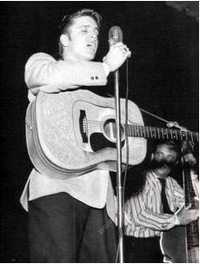 Without going into the horrific design of this sleeve, which doesn't fit any of the design practices used by RCA in that era or any era the facts are in the dates. A sleeve printed on December 2, 1955 using a photo taken of Colonel Parker, Eddy Arnold, Elvis and Steve Sholes taken on December 1, 1955. There is a wrap-around bulletin with a November 28, 1955 date. It would have been a monumental task to develop the film copy the bulletin and provide this material to a designer to design a sleeve with this material. Then go through an approval process. Take it the printers. Create the plates to print and print. None of that logic matters when you take into consideration the most glaring problem with this sleeve; the photo of Elvis Presley that was taken nearly five months later on April 21, 1956.