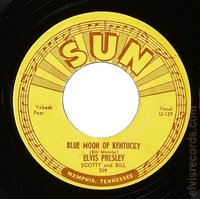 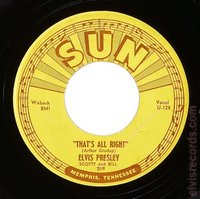 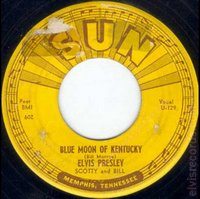 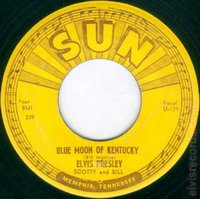 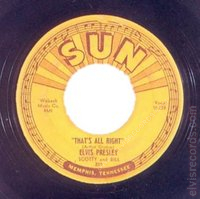 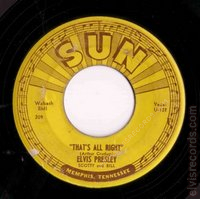 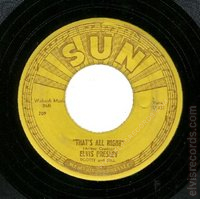 Reportedly there are 37 variations of SUN labels.9 That is considerable by any standard, particularly in this case where only 101,578 copies were sold.10

In November 1998, Graham Knight rediscovered two Elvis Presley singles he bought in 1968 while in Memphis. The two unmarked, metal plates were bought for just 30 cents. One plate features "That's All Right Mama" originally released as Sun 209. The other plate "Mystery Train" on Sun 223.11 The other sides two these records have never been found. In 2005, the Memphis Recording Service released "Elvis Presley - Memphis Recording Service - The Beginning of Elvis Presley - The Birth of Rock n' Roll, volume 1: 1953-1954". This package includes a DVD audio disc, a 100 page book, and a 45 RPM record. The record is "That's All Right Mama" pressed with the metal plate complete with push-marks discovered by Graham Knight. The other side of the record is blank.12 Since "That's All Right Mama" is pressed from a metal plate that had been in various states of storage for nearly 50 years, the playback will reflect all the imperfections of the metal plate. While the record is valued at $20 in the most recent edition of Presleyana VII, realized auction prices do not reflect this value. On March 6, 2010, a copy sold for $20013. More recently, a copy sold for $17514. These auction prices may be due to the lack of information or misinformation provided in the auction detail or that there is a general demand for this particular re-issue. Buyer beware, no original pressing of this single is known to exist with only one side pressed.