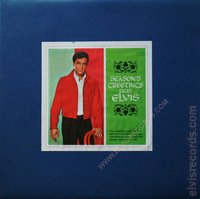 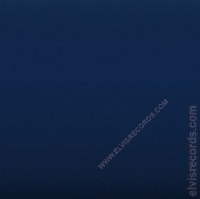 Cover: Front and back. The album is reported to have been released without a sleeve. There is an interesting note about this copy, it was found in New York in 1976 in a blue cover with the insert of the reel to reel tape glued on it. Nobody knows if it belongs to the record and who made it.1 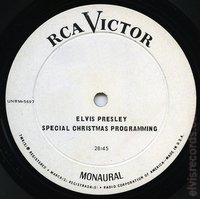 This Special Christmas Programming album has a running time of 28 minutes 45 seconds on a single side of this two sided album. The other side is blank.

New York - More than 3,000 stations will broadcast an Elvis Presley Christmas radio program on Dec. 3 and 10. The half-hour program will include selections from his RCA Victor Christmas single "If Every Day Was Like Christmas," two sacred albums and one Christmas album.

A spot announcement by Dale Robertson for Christmas seals also is part of the program. One minute has been left at the end of the program for local public-service announcements. Victor is supplying stations with special program kits containing a 7 1/2 - i.p.s. tape of the program plus a complete script with timings and a separate copy of the single. Being mailed separately are two four-color posters for store use and an ad mat for local tie-ins by dealers and radio stations. Trade and consumer advertising also is slated.

A 28-page booklet is a listing of the radio stations carrying Elvis' 30-minute Christmas Special radio broadcast, and also promotes Elvis' movie "Clambake", three Christmas albums, and two albums of sacred music. Another page offers Seasons Greetings from Elvis Presley Music, Inc. and from Gladys Music, Inc., and the back cover is a holiday message from "Elvis and the Colonel.5 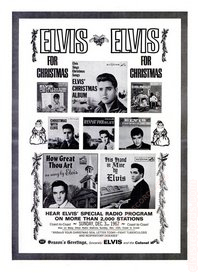 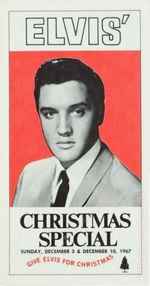