The origin of this envelope has been right in front of us the whole time. Check out the cover of the September 21, 1956 issue of RCA Victor's Deejay Digest.1 The article is entitled, HERE COME THE "TOO-FERS"! It goes on to read,
Man, them hilarious envelopes you've been gettin' for the past few months are really the "most" because from here on in they're gonna be full of the MOST music you ever saw..,"TOO-FERS." ... Eight records ... SIXTEEN SIDES ... you can't help but have the best programming with these great EP's. And they're engineered for easy cueing.
As a reminder you should note that these records are made for only one purpose - YOU DEEJAYS. Nobody can find 'em in a store.. they'll be no regular production. They're made just for you and once we put on all the stamps, they're practically "Collector's Items." You're about to have the most complete Victor library ever assembled. Great future. "Have a 'Too-fer'"!
And on the bottom of the cover, is a picture of four envelopes.. look familiar? They should. If anyone has a listing for the December release, that would solve the mystery of the 8 records that would have accompanied this sleeve. May or may not have included an Elvis title. I would bet, and this would be a first anywhere, that one of the records would have been DJ-56 Too Much / Playing for Keeps (EP). But that is my two cents at rewriting history. 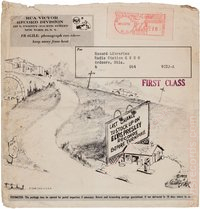 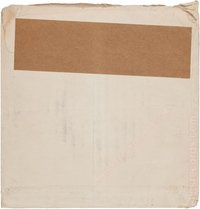 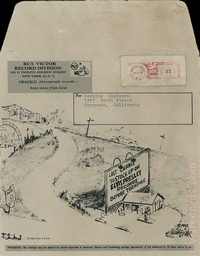 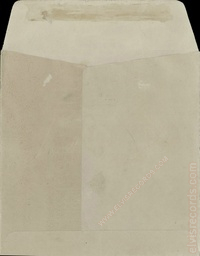 Cover: Mailing envelope. Larger than a standard 45 RPM sleeve, reminiscent of a mailer envelope. Coated paper stock. The back may contain a glue strip on top. The paper fold is glued over the bottom and there is a seam along the middle of the back.23

This is an example of mystery mailing envelope. It was offered by Heritage Auctions and ended on April 27, 2014 without a sale, as it did not meet the reserve. It was misidentified to be for the CR-15 Old Shep custom record, which has thoroughly been dis-proven. The back may be compared to the envelope used for EPA 747 for similarities. The artwork is by Will Eisner, a comic book artist most notable for The Spirit. This example is addressed to KVSO radio in Ardmore, Oklahoma. The postmark is December 21, 1956. It could be inferred that the record was produced at the Rockaway plant as the postmark is from Rockaway, NJ.