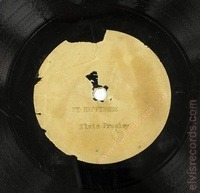 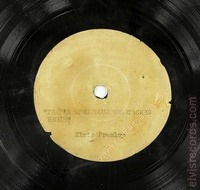 In 1953, Elvis recorded this acetate at Memphis Recording Service (home of Sun Records) and paid the sum of $4 to record a belated birthday gift for his mother — his first ever recording. Elvis sang two songs: "My Happiness" (Side A), which is the only Elvis recording that exists of this song, and "That's When Your Heartaches Begin" (Side B). Legend has it that Elvis' friend Ed Leek convinced and accompanied Elvis to the recording studio that day. Elvis was greeted by Marion Keisker, assistant to Sam Philips, who asked Elvis who he sounded like and Elvis responded, "I don’t sound like nobody." Little did she know at the time that he was absolutely right. In these two songs that Elvis chose to sing, Marion heard something different, enough to note Elvis' name and telephone number and add that he was a good ballad singer. When Elvis left the studio that day, he and Ed stopped at Ed's parents' house to listen to the fresh recording, as they had a modern phonograph and Elvis wanted to hear how it sounded. Elvis left his friend's house that day without the record and this acetate is being offered directly from a descendant of Ed Leek. The acetate has a label containing the titles of each song typed on the reverse of a Sun Record label.1

The reason that this record has made this site, is that since it's sale, a re-issue was pressed in 2015 for a limited edition Record Store Day 2015 exclusive by Jack White's label, Third Man Records with catalog number TMR-306. Like the original, one-of-a-kind acetate, it is a 10" single pressed at 78 RPM. The label, however, is a solid label, that is not actually damaged, however, an image of the damage label.