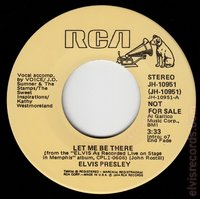 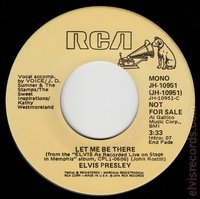 With the same song on both sides, one in Stereo and the other in Mono, there is no commercial equivalent to this promotional issue. It was distributed to radio stations only. There are a couple of stories behind this record. One story is that the song's publisher, Al Gallico, had this single pressed to send to radio stations which would eventually force RCA to commercially release this song.3 Another story is that there were those within RCA whom were pushing for the release of this song as a single so without approval produced and issued this promotional 45, hoping to force RCA into releasing the single commercially. The record was quickly pulled.4 Although never released commercially as a single, the song was pulled from the DJL1-0606 Elvis: As Recorded Live On Stage In Memphis and was brought back to fill AFL1-2428 Moody Blue5.

Sources offer several different dates for the release of this single ranging from 6/19742 to 19777 to 3/1977.4. The 1977 dates can be collaborated a couple of ways, by catalog number and by record label design. An April 2, 1977 issue of Billboard lists RCA JH-10946 Neal Fox with song Babe. A promotional copy of RCA JH-10948 Flame with Beg Me b/w Angry Times exists with 3-21-77 written on the label. A May 28, 1977 issue of Billboard promotes RCA JH-10954 (PB-10954) Jesse McFall and Jess Mack Class Reunion with Tell Me When You're Ready. An alternate method of collaboration is by record label design. Promotional labels of 1974 were printed in yellow with RCA on side and did not feature the dog near top. The label design for Let me Be There is consistent with other promotional labels of this period.

The Definitive Truth Behind JH-10951

A 1977 issue of Radio & Records featured JH-10951 in article titled Presley Single Not A Single?. This article was found inside a copy of JH-10951, where it has been safely tucked away since 1977. It provides definitive evidence as to the reason for the existence of this single and that it actually was pressed in 1977. The backside of the article, promotes the New Riders of the Purple Sage LP, which was released in 1977.9

Presley Single Not A Single? From coast-to-cast,rumors have stirred the industry about the RCA single (JH-10951), Elvis Presley, "Let Me Be There." This is to set the record straight regarding the song: Publisher AL GALLICO, who owns the publishing rights for "Let Me Be There," had 2000 promotional copies of an Elvis Presley version of the song pressed through RCA Records in New York. The cut was from the "Elvis As Recorded Live On Stage in Memphis" album. The first major rumor surrounding the release was on an 8 million suit against Gallico by Presley. This has been proven to be totally false. R&R contacted ED HOOKSTATEN, Mr. Presley's attorney, and according to his office no suit has been filed. After talking with Gallico, he referred us to MEL ILBERMAN, Division Vice-President of Domestic Operations for RCA Records. According to Gallico, Ilberman told him, if he had enough action on the cut, RCA would release it as a single. Ilberman told R&R, "I talked with Gallico a couple months ago and may have said that in a conversation. But in my latest conversation with Gallico, last week, I told him we couldn't do it now, because we have plans for a new Elvis release in a few weeks." Gallico says this method of presenting a cut has been done many times before. R&R talked with MEL FOREE of Acuff-Rose Publishing. He backed up Mr. Gallico's statement. R&R reached JOE GALENTE,Director, Nashville Operations, RCA records, he said, "We are not going after the record. There is going to be no record product available. There will be no stock on the record. I guess this is the biggest fluke in the record industry. It is not an official RCA record." Galente also stated another Elvis Presley single is scheduled for release in about three weeks. R&R's policy regarding the tracking of the song: We plan to reflect airplay as we do normally. It will be graphed and listed weekly as would any other song.10

The Record Digest, vol. 1, issue 1, from September 1977 edited by Jerry Osborne offers a small blurb about this single, but enough of one to put the date to rest.

Promotional copies of LET ME BE THERE, issued to certain radio stations in May/June, have recently commanded prices of $20 - $40. There were only 2000 pressed... This mysterious release was on the regular RCA promo label and carried their logo although, RCA has indicated that they had no knowledge of it's release nor did they authorize same. Sources indicate that the record may have been pressed and distributed by the publisher of the song in an effort to build interest in the tune and perhaps force RCA (by public demand) to release it as their next single.11