These images of G.I. Blues extended play were sent requesting verification and validation as it is not listed in any price guide or publication. This example was offered in 2010 with the description, U.S. promo releases made and distributed in 1960 for the Sears Roebuck & Company stores and given out free with the purchase of any U.S. Army jacket windbreaker.1 What confuses the issue is that it reads Made in U.S.A. on the labels. 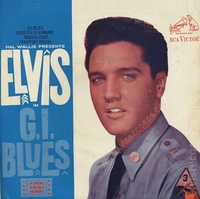 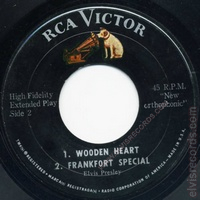 The Analysis
This is not an expert analysis, however, after collecting for many years and reviewing 1000s of images, there are patterns that develop. This example are many inconsistancies that support the conclusion that this is a bootleg. If for no other reason, the RCA Victor logo used on the cover is not 1960, however at least two years later. This does not support the story of its Sears Roebuck & Company origin.