Side 1: You Turned the Tables on Me / I Fall in Love with You Every Day
Side 2: Guess I'll have to Change My Plan / Can't We Be Friends 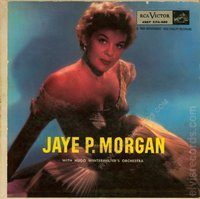 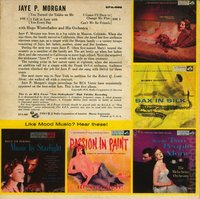 Cover: picture sleeve front and back. JAYE P. MORGAN in yellow letters. WITH HUGO WINTERHALTER'S ORCHESTRA in white lettering. RCA Printed in U.S.A. in lower right corner. RCA VICTOR box in grey and HIS MASTER'S VOICE box in black. A "NEW ORTHOPHONIC" HIGH FIDELITY RECORDING" in all caps. The ad back has "Like Mood Music? Hear these!" printed in the yellow. 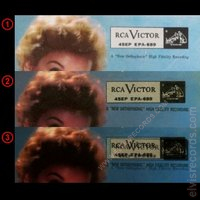 There are a couple of differences between the EPA-689 regular retail issue front cover and that of the promotional issue of RCA Victor EPA-992 /EPA-689 Elvis / Jaye P. Morgan (EP) cover.

1. This is a closeup of part of the promotional cover. The RCA Victor box does not touch the head of Jaye P. Morgan. A "New Orthophonic" High Fidelity Recording is not in all caps.

2. This is a closeup of part of the original retail cover. The RCA Victor box touches the head of Jaye P. Morgan. A "NEW ORTHOPHONIC" HIGH FIDELITY RECORDING" is in all caps. 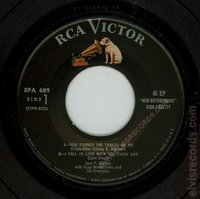 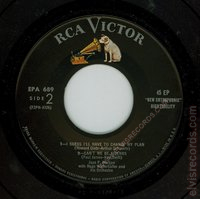