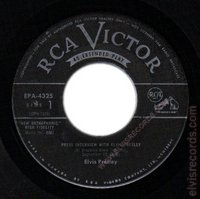 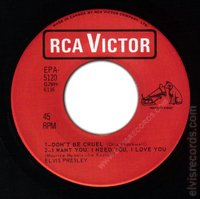 Images from the collection of Barry McLean.

Additional Detail
Only one EP "Elvis By Request" was pressed/issued on the Compact Double 33 label. The label is near-identical to the U.S. label. The only differences are that LPC 128 appears on two lines, not one, and the title is closer to the centre hole as the credits for "Flaming Star" are on three lines and not two. There is a Canadian cover for this release with © Printed in Canada printed on the front bottom of the cover.1

About the Extended Play Covers
RCA Canada did not always print its own EP sleeves. In some cases, U.S. sleeves were used. It is not unusual to find a Canadian record with a U.S. jacket (says "© Printed in U.S.A." and not "© Printed in Canada"). EPA-992 "Elvis" is documented as the first Canadian printed EP jacket. The example below is EPA-5088.2 It has been confirmed that Easy Come, Easy Go was also issued with a Canadian sleeve.1 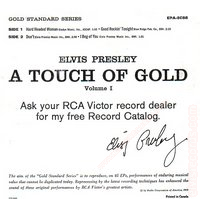 Promotional Extended Plays
There are two known extended plays that were released with white label promo labels. They are EPA-4319 "King Creole" and EPA-4325 "Elvis Sails". These were issued with U.S. covers.4

Special Products Extended Plays
The special product records are among the rarest of all Elvis records. Examples includes SPA-7-37 (Perfect for Parties), DTFO-2006 (Aloha Juke Box EP), DJ-56, SPA-7-27 (Save On Records), and so on. Which of these were issued on a Canadian label is unknown and still being discovered. The only one discovered to date is the Great Country/Western Hits, a 10 EP box set issued on the Silver & Grey label. There is one Elvis record, sides 6 & 15, with the songs Blue Moon of Kentucky, Love Me Tender, Mystery Train and Milkcow Blues Boogie (shows as Milkcow Boogie Blues on the record). In addition to the label difference, the set differs from the U.S. version only in that there are no separator inserts.

References
For many years, there was a great website called www.elviscanada.com. It was the only website of it's kind in that it provided great detail and lists of the Elvis Presley Canadian discography. It was a valuable contribution to Elvis collectors everywhere. I referenced it quite often. Recently, I have discovered that it no longer exists. The information is seemingly gone forever. I could not find any other site that even touches on the extensive Elvis Presley Canadian Record Catalog. I was fortunate enough to recover that information to bring it back to the Elvis collector community. As updates become available, references will follow. On August 31, 2013, Tom McCallum, the curator of www.elviscanada.com emailed that the site is back!