This is the Elvis Presley 45 RPM Record Guide (US) Gold Standard Series Matrix. The RCA Victor Gold Standard Series are re-releases of the original RCA catalog. The re-releases have been re-cataloged and had changed labels throughout their release history. Early Gold Standard Series records were black label dog on top, later black label dog on side, to orange, red, and back to a black label in 1976. This matrix or cheat sheet is compiled through years of research searching the Internet, eBay, various discographies, and price guides. The prices are expressed in US Dollars and were assessed around 2008. The intent of the prices is to demonstrate the rarity of these records. Where there are no prices, these records either do not exist or have yet been accounted.1

Sometime ago, I read an article on the Internet about a large collection of baseball cards from the turn of the 20th century that was recently discovered. A major card dealer flew to the source and was amazed at the find. The quality and quantity of the collection was spectacular. Variations such as player poses and colors were discovered and cataloged for the very first time. This was a most complete set of cards of that era. The dealer had lists of collectors whom may be interested in cards of that era to complete their respective sets. For the most part, price guides listed the majority of the cards identified from that collection. Regardless of condition, the major stars or known lesser printed cards valued into the high $100s to $1000s where the remaining cards considered as commons. The dealer obtained want lists from major collectors and dealers from around the world. When compiling the want lists together an interesting pattern emerged. Cards that were once considered common are actually quite rare, perhaps some of the rarest in the set. Some of these cards were to be found on each of the want lists. This of course, starting bidding wars. The purpose of this story is this. The Gold Standard Series records were all released in a series. 447-0600 through 447-0685 over a period spanning the late 1950s through the late 1970s. It has generally been accepted that one may find a similar quantity of one catalog number as would find of another, meaning that the price range would be similar. However, I contend that this is NOT the case. Since this site began in 2009, many collectors have offered their collections as scans for all to see. Internet searches, eBay searches, and communicating with other collectors with collections both great and small, it has become clear that there are some catalog numbers that are NOT available regardless of the label, and in some cases label dependent. Case in point, 447-0612! After five years, I have seen my first copy of 447-0612. A black-label, dog on top example at that. This is also listed in the guides as being pressed with black-label, dog on side, orange label, red label, and black-label, dog near top. With all of those pressings, you would think this is more readily available. It is in my opinion, that the guides have this one wrong, and a hand full of others too. Another example 447-0641 black-label, dog on top! Very difficult to find. The other labels for that catalog number are also difficult to find, but not as much as the black-label, dog on top. Happy hunting!

Although, the Gold Standard Series collection were more likely to have been originally issued with the first two sleeve, generic sleeves may also have been used. Through the years, later pressings would have been issued with the later sleeves as shown.

The key to the table has been a work-in-progress since March 2015 are for the following notations:

As of December 17, 2020, an additional column updates this table by making the distinction between the dog near top labels as small or standard size RCA and Victor dog logos. At the time of this writing, both sizes seem to exist in near equal numbers for the most part. Sometime in early 2021, the tables got corrupt and this extra column was accidentally deleted. It will likely not be recreated. At the moment, individual pages will not be updated to reflect the dog near top sizes. More about this distinction can be found Gold Standard Series (Dog Near Top) Label Variations

A special thanks to world renowned author and editor Neal Umphred and to Dave Reynolds of ElvisRareRecords for help ensuring the accuracy of this page and site. There are many others, to thank and their credits are found throughout this site. Thank you, all!

The years are a generalization as to the the first year the majority of the singles were originally released with the label described. 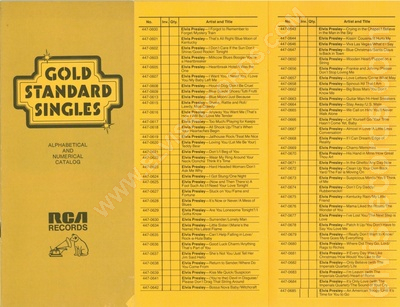 This table is a summary of the Gold Standard Series catalog numbers as found in the 1970 through 1973 Elvis Presley RCA record catalogs. The catalogs are advertisements for the current RCA record listings. The 1970 catalog was printed either in September or October 1969, based on the listings. The 1971 catalog was likely printed in the first quarter of 1971 and the 1972 catalog printed January 1972. This is important, as the 1970 catalog lists not only extended play 45s, but 447-0651 and 447-0652 under the gold standard releases. The first regular issued gold standard 45 with a red label was July 15, 1969. This could imply that 447-0652 and 447-0651 could exist with red labels. Others will disagree with this statement, but it is the belief of this author that 447-0652 and 447-0651 do not exist with a red or orange label. These catalogs are also found on this site.
The scarcity of the red label gold standard 45s may be in direct correlation of these catalog listings. The table below has letters H for half-million sales, M for million sales, D for domestic sales, L listed, and S for sacred listings. The gold standards are found in the catalogs in one or more of these sections.

Based on the table below, where several catalog numbers drop from the 1971 catalog like 447-0604, 447-0614, 447-0631, 447-0645, and a handful more, these have sold into the hundreds of dollars in recent auctions, as they do NOT come up very often. Note that 447-0640 is dropped from the 1972 catalog and is impossible to find. This chart may actually be the key to solving the gold standard series red series riddle, as well supporting the position that many more catalog numbers are not to be found from the black, dog-near-top issues from 1977 onward.