Side 1: Wonderful World / Edge of Reality
Side 2: A Little Less Conversation / Almost In Love 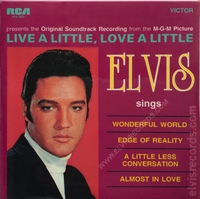 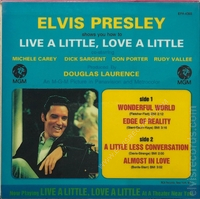 This prototype EP was part of a series of EPs designed for Elvis' first '69 Vegas appearance to be made available only for the people who attended the first night's show. The design was heavily influenced by the releases of many of the European countries, such as England, Germany and France, where their EPs were produced on glossy, laminated covers. While no record exists, there were two prototype sleeves created. Originally, these images were provided for use on this site with the condition that there be additional watermarks and slightly modified, not to the point to detract from their original intention, however to protect the original integrity of the prototype covers.1 However, with the latest development of these sleeves being offered on eBay and sold for $1035.64. The images on this site have been corrected.2